A CHAPTER OF STRUGGLE THAT ENDED TO BEGIN


“Let’s try and avoid death in small doses, reminding oneself that being alive requires an effort far greater than the simple fact of breathing…” Pablo Neruda 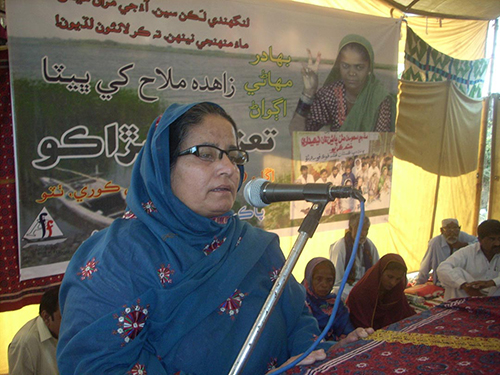 There are people who leave this mortal world far earlier than expected just because their motive is to live an eternal life in the annals of history. The ones who prefer an endless life in history are those who fight their individual struggle so that they could be able to fight for a collective cause. The voice of such souls echoes even if they cease to exist corporeally. Their voice echoes in the corridors of power and is reminder of the rights of the one who faces denial. Their definition of life is “struggle”. While writing above lines I feel proud to say that Tahira Ali Shah, the martyr of water rights is among such few souls. “I wish that I don’t die a natural death. I would love to die struggling for underprivileged people”, said Tahira Ali Shah. These words of Tahira Ali Shah came true when she set off for an eternal journey on March, 10, 2015 following a fatal road accident while she led PFF’s 14-day long campaign known as Keep Rivers Free Movement.

Tahira Ali Shah was the wife of Muhammad Ali Shah, chairperson of the Pakistan Fisherfolk Forum and co-chairperson of the World Forum of Fisher People (WFFP). One of the founding members of PFF, she also remained PFF’s senior vice-chairperson. Afterwards, she became the founder of Noori Development Foundation, an organization working for fisher women’s rights. Tahira Ali Shah was born on December 18, 1964 in Goth Ibrahim Hydri, a coastal village inhabited by fishing communities and one of the neighborhoods of Bin Qasim Town in Karachi, Sindh, Pakistan. Moreover, she hailed from the Syed family, which is prominently known for strict parda (veil) when it comes to females. Women of this family background are stringently confined within the premises of their homes. The place where she grew up is a male-dominant society where women are deemed to be nothing more than housewives. 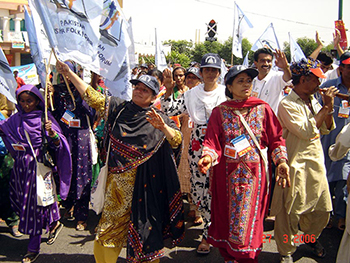 Women of this family background are stringently confined within the four walls of their homes. This was also one of the major reasons why she could not get higher education after completing her elementary education. Breaking all such societal and family taboos, Tahira Shah accompanied her husband Muhammad Ali Shah through every thick and thin during the struggle. Upon her stepping out of the home for the cause of poor masses, she faced a lot of criticism from her family and relatives. But she remained consistent since she strongly believed that women, especially the ones whose voice is suppressed must be prodded into action. Her struggle for the rights of rural women, especially fisher women, is incomparable and will always be.

Her love for education

Because of belonging to Syed family that is primarily known for its conservatism towards women, Tahira Ali Shah could not be educated in a formal setting for higher studies. Nevertheless, it is amazing how she informally educated and trained herself when she started her struggle for the underprivileged communities of the area. She had that zeal and zest to be trained and capacitated. With this spark within herself, she taught herself to read and write in the middle of her family engagements and even when she had little kids who needed her the most. The day came when after learning by trial and error, Tahira Ali Shah spoke up for the rights and became a right-based campaigner, an activist and a leader as a matter of fact. What inspires is the fact that not only she learned, and completed her education but she taught the suppressed ones to speak freely as well. Her disappointment of not getting higher education could not prevent her from educating herself relating to the complex political, economic and

social issues that posed threat to the livelihood of the communities she struggled for. She knew that education is not merely being able to read and write but it is about having a right attitude, right behavior and the feelings for the troubled ones.

Before Pakistan Fisherfolk Forum came into being on May, 5, 1998 later on to turn into the biggest social movements of South Asia, PFF was initially known Anjuman Samaji Behbood. A female wing known as Saheriyen Sath was also the part and parcel of Anjuman Samaji Behbood. Tahira Ali Shah was at the fore front of Saheriyen Sath when she started to sensitize and mobilize the suppressed fishing and peasant communities of Sindh province. Part of her own self-development and capacity building, Tahira Ali Shah began to part take in theatre groups that highlighted the issues of fishing communities. At first she participated in the theatres and then started writing script for the groups too. Internalizing the activism day in and day out she began to sing folk songs and danced to the tune of fishing communities throughout the country. With time, she began to participate in workshops and seminars. The day came when she emerged as an eloquent orator. Her speeches had the flame that lit the torch of struggle.

The campaigns she led

She stood shoulder to shoulder with her husband whether rain or shine. Following are the major campaigns that she led along with Muhammad Ali Shah and other senior comrades.

* Struggle against Rangers in Badin

* Illegal occupation of the Chotiyarion Reservoir in district Sanghar

* Long-standing issue of detained fishermen of Pakistan and India

* Protection of mangrove forests in the coastal belt of Sindh

* Restoration of Keenjhar and Manchar Lakes

* Mainstreaming the issue of the rights of peasant communities

The struggle and the will to fight against the odds ran in her veins. She proved this when she married Mr. Shah in the midst of opposition from her kith and kin. She tied the knot with Muhammad Ali Shah on April 22, 1982. Marital phase of life brings about a change indeed. But her marriage to Muhammad Ali Shah was the defining moment of her life since it proved to be a catalyst for her activism, struggle and campaigning for the rights of the fishing and peasant communities. “Her activism geared up after the marriage and even after she had 6 children”, 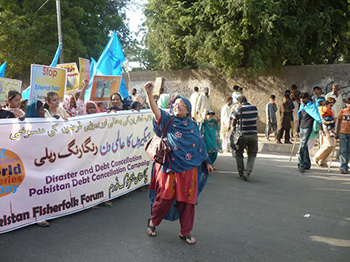 says her daughter Yasmeen Shah Kazmi. With a joint family of a caring husband, 4 sons, 2 daughters and grandchildren she kept on playing a pivotal role in PFF’s campaigns. She always stood by the side of her husband, continuing her commitment to the cause till her last breath. The fisher community along the coastal belt of Sindh and Balochistan is well aware of the roles she played in different movements, including one against Rangers in Badin and another against the occupation of Chutyarion Lake.

Circle of her friends

They say birds of feather, flock together. So was the case with Tahira Ali Shah. She was the leader of marginalized communities. She strongly opposed the corporate and commercial set-up that put the underdeveloped world at stake only to attain their vested interests. Along with Muhammad Ali Shah, Tahira Ali Shah remained in touch with Chandrika, Arundati Roy, Alexis Fossi, Catharine, Anees Haroon, Dr. Fozia Saeed, Feroz Mehdi, Herman, Dr. Aly Ercelan and others who remained comrades and advocates of their respective right-based movements.

Tahira Ali Shah is the soul from Pakistan who fought with her personal odds, overcame and then took to the streets for the cause of fishing and peasant communities of the country. She has crowned us with a heritage of struggle as depicted in her pictures. Her heritage shall keep imbuing us with the spirit that she had. Now it is our duty to make the most of this heritage of struggle.